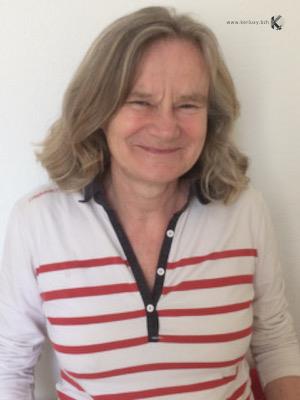 French from abroad, Breton from the diaspora, Toinon had taken the habit of returning to the land of her ancestors during the vacations. From this place at the end of the world (Penn-ar-Bed), she only knew beaches and friends from everywhere. By a combination of circumstances, she found herself in Brest, with no money and no car, with her children going on an adventure on the roads... in a van. Another facet of Brittany appeared to her. She imagined a whole gallery of characters centered on a bistro, the Colbert in the Commercial Port.

She has always wanted to write, create and transmit. After studying literature at the Sorbonne, she created a promotion company in connection with Africa, the Carribbean and the Pacific.

In 2006, Toinon led a polyglot life as a French and foreign language teacher. An exciting interlude with Swiss people, Americans, Chinese, Russians and other nationalities.

Novelist and film maker, her daily life is writing. She is currently working on a film about the life of her aunt who was the muse of a famous painter during the "Trente glorieuses", Charles Lapicque.

From her adventurous chilhood, she has kept the passion for people, countries and traditions that feed her works.

And then there is Brehat, her island of heart where one of her heroines, Susan Pol, a retired postwoman, comes from. This globe-trotter puts down one day her suitcase at her cousin's in the commercial port of Brest; there she travels with sailors, travellers and other colorful figures.

Your request has been well registered. Thank you.
An error has occurred. Your registration could not be well received.

Opening of the Store

Opening of the Art Gallery

The online purchase will be available Summer 2020. If a work of art interests you, you can nevertheless contact us.